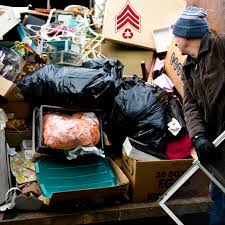 In the European Union 7.3 million cars per year are ELV’ed or ELV Treated, although there are 11 million total sent to the graveyard, furnace, junk yard or recycle crushers, but first plastics and other items are taken apart. In the US we just crush the crap out of them and deal with the entire pancake. Let’s face it this is a good start. Problem is that each Country in the EU has different guidlines, these countries can never make up their mind. For instance the debt borrowing of the Euro in Germany and France and the rest of the countries having to pay later for the hamburger today.

In the US we have the United States, although junk pickup sacramento often act like the United Countries although we are not much better as in almost every industry we have a different set of laws. Even smaller states with little population bases have conflicting laws, states such as VT, ID, WY, MT, NM, NH, RI, WV, IA, NE, ND, SD. States like CA, OR, WA, MA act like socialist countries and obvious are paying for it now. Beware the socialists in their goal to make all things equal, they can ruin anything, ask Plato. The problem being making non-linear decisions for the best of the country is nearly impossible, for us to come to terms of our leadership role in the Americas we have a lot to be desired on many a front.

We can do better than this, but we fight over the means, why? There can be no excuse. No wonder we cannot come up with solutions to issues like the junked vehicles, which leak all kinds of things when they rot in fields and bleed iron oxides, heavy metals asbestos, and oil, fuel (turns to varnish), brake fluids, radiator fluids and obviously leach into the ground water pf the local farm and cause all kinds of cancers and problems with kidneys. There are issues. But also we see old farm implements and other equipment junked out back. You can see this on every back highway in America and every small town serviced or within 100 miles of a Wal-Mart. In other words every where in every small town. Starting in January of 2007 all European Cars sold will be the responsibility of the manufacturer no matter how long the vehicle is in service.

If a new Ford Mini-van is in a crash after only 2 months on the road it will be the Ford’s responsibility. If it is on the road for 40 years and then junked it will be Ford’s problem. Sounds a bit of a problem to me like our under funded pensions in this country of which the Big three are probably a good example of a serious problem with blue chip companies. Scary thought. You see as countries become more socialist the consumer will not be responsible for anything.

Right now 75% of vehicles in the EU are ELV’ed they wish to increase this to 85% by 2006 a noble cause. 95% by 2015. But we know this is absolutely the wrong way to do this after all the State of CA set and dictated a timeline for electric vehicles and that did not work, today in the Business News GM announced it was completely cutting the plug on all electric vehicles for the newer technology of Fuel Cell. And pursuing the Fuel Cell development project with UPD. Meanwhile with all the EPA deadlines un-met and all the passed costs to businesses by light, Medium and Heavy duty truck manufacturers, FedEx’s Fred Smith put out a challenge that he wanted 50% more fuel efficient units with 90% less emissions. Apparently these do-gooders do not understand entrepreneurship otherwise they would be solving the world’s problems by creating not accusing.